MBAJIORGU AS AN ECOLOGICAL DRAMATIST: A BRIEF PROFILE 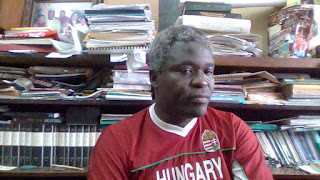 Greg Nnamdi Nnabike Mbajiorgu (NURESDEF Laureate) (B. A. (Hons) Dramatic Arts, (Nigeria), M. A. Theatre Arts, (Ibadan) M. A. Mass Communication (Nigeria) is a leading activist theatre and environmentalism and the poetics of climate change. He is Nigeria’s first dramatist to publish a play that squarely addresses the problem of climate change in Nigeria (Wake Up Everyone, 2011, 2014). He is also the first African to publish a monodrama (The Prime Minister’s Son, 1991, 2000, 2014). His seminal play on climate change, Wake Up Everyone won first prize at the Inter-Universities Research and Development Competition organized by the National Universities Commission (NUC) in 2012.
This well-researched ecological drama foresaw the flood that ravaged most parts of Nigeria in 2012; a situation which we are also experiencing currently. Beyond writing plays, poems and songs on environmentalism and climate change, Mbajiorgu has also co-authored a mainstream academic paper on Climate Change studies in Arts and the Humanities (2015) with Prof. P. Okpoko and Prof. Nnanyelugo as co-authors.
Wake Up Everyone was first performed for the African Technologies Policies Network, Nairobi, Kenya at the award/dinner night of their international conference in 2009. It was equally produced at Nsukka for the University of Nigeria’s African climate change adaptation initiative (ACCAI) in 2010 and in 2014, the University of Nigeria, again, commissioned its production as the core highlight for its 44th convocation ceremony on 23rd January, 2015 at the institution’s Arts Theatre. After that, other universities and higher institutions started to emulate UNN by producing the play for the convocation as well. Among the latest are Bishop Ajayi Crowther University, Oyo State which used it for its seventh convocation ceremony and College of Education Special, Ibadan, Oyo State.
Wake Up Everyone is currently celebrated as a reference text in studies of environmentalism and climate change in Nigerian universities. Teachers and students of Theatre Arts, Linguistics, Music, Fine and Applied Arts, History, Archaeology, Earth Sciences, Bio-resources Engineering and Agricultural Sciences, are currently subscribing for it as a home-grown culture-oriented material on the on topics in environmentalism, climate change mitigation and adaptation in Africa.
Virtually all major Nigerian newspapers have reviewed Wake Up Everyone.
The success of this environmentally-oriented drama and other ground- breaking works of his have won him several prestigious awards and honours among which include the following:
Awards


Presented to him by the Department of English and Literary studies, University of Nigeria, Nsukka, 2005


Conferred on him by the Society of Nigerian Theatre Artistes, 2013


Presented by the Nigerian Book Foundation with support from Anambra State Government, 2013

5. Award of Excellence in Solo Drama and Award of Distinction as a leading eco-dramatist in Africa


Both conferred on him by Nigerian-Turkish Nile University, Abuja, 2014

6. Award of Excellence as an Exponent of Ecological Theatre and Monodrama in Africa


Presented to him by the Association of Nigerian Authors in collaboration with Enugu State Broadcasting Services [ESBS] on his 50th birthday in 2015.

7. Award of Excellence in recognition of his contribution to Arts and Heritage promotion and preservation in Nigeria through Theatre.


Conferred on him by the Anambra State Book and Creativity Network (ANBUKRAFT), 2016

9. Shell-UNN CEMAC Sustainability Award
Conferred on him by UNN/Shell Center for Environmental Management & Control (CEMAC), 2017 in recognition of his outstanding contributions in Environmental Education.

Honours
1.     In 2010, the Governor of Nassarawa State, His Excellency (Dr.) Aliyu Akwe Doma (OON) presented a plaque of honour to G. N. N. Mbajiorgu in recognition of his contribution to the role of theatre in Nigeira.
2.     In 2014, the department of English and Literary Studies, Nigerian-Turkish Nile, University, Abuja organized a conference in honour of G. N. N. Mbajiorgu tagged “Forty-eight Years of Solo Performing Art in Post-colonial Nigeria (1966-2014)”

Posted by Mbajiogugreg@ blogspot.com at 09:12 No comments:

Towards the Development of the Solo Theatrical Sub-Genre in Nigeria: A Critical Examination of its Major Handicaps

The art of solo performance is becoming popular in America and Europe in every sense of the word. The increasing success of this theatrical form has created fresh motivations and objectives for theatre producers, playwrights, directors, actors and even designers. Though this minimalist theatre thrives in the domain of the individual, recent studies in America, in particular, has shown that monodrama poses exciting challenges, not just for actors but playwrights, directors, producers, designers, technicians and theatre scholars, who have found this vibrant and unique art form a valuable educational tool with
extreme creative and innovative possibilities that can enhance and develop playwriting, acting and directing skills. But despite the scholarly and artistic breakthroughs that have been recorded in this sub-field in recent times, Nigerian theatre scholars, playwrights, directors and producers are still unwilling to explore the potentials of monodrama. Strangely, theatre scholars in Nigeria still regard this form as a theatrical sub-field that is incapable of stimulating significant academic discourse. Similarly, most theatre artists and professionals in Nigeria tend to dismiss the solo play as an individualistic art that has little regard for theatre concept of inter-relationship.

On the basis of this background, the researcher hopes to critically re-examine these contentious issues and to x-ray all other factors that have impeded the academic and artistic growth of the solo performance art in Nigeria. Through this study, we may also be placed in a better position to appreciate why the seemingly popular appeal and economic success of solo performances in Nigeria rest squarely on sheer guts and creative resourcefulness of multi-skilled and talented upcoming Nigerian actors (such as the late Funsho Alabi and others) whose efforts in this direction can be greatly enhanced and consolidated by the interest and support of seasoned and notable Nigerian theatre historians, scholars, artists and critics who seem to have completely neglected and ignored this bourgeoning art form.

Available from here
Posted by Mbajiogugreg@ blogspot.com at 05:35 No comments: